After scoring great financial successes with his mining ventures, Spencer Penrose’s dream was to become a hotelier. His efforts were rebuffed when he tried to purchase the Antlers, Colorado Spring’s premier hotel which had been built by General William Palmer. After this rejection, in 1916, he decided to construct, with the financial assistance of two of his partners, the most magnificent resort in the country.

He hired Whitney Warren, designer of New York’s Grand Central Station as well as the City’s Ritz-Carlton, Belmont, and Vanderbilt Hotels, as the architect.  Construction started April 13, 1916 with crews as large as 500, many from Europe, working on the building. This included an army of Italian craftsmen brought in to paint frescoes and ceilings reminiscent of artwork in Italian cathedrals.

The architectural style was Italian Renaissance, with a pink stucco exterior. The four wing structure had arches and a balustrade.  Other features included a curved marble staircase, dramatic chandeliers, Della Robbia-style tile, hand-painted beams and ceilings, a curved marble fountain, and elaborate exterior detail.  Much of the stone was quarried from Penrose’s Turkey Creek Ranch. Frederick Olmstead who designed New York City’s Central Park was the landscaper.

When the 350 room hotel, costing two million dollars, had its grand opening June 29, 1918, Penrose invited local friends, social leaders, and dignitaries from all over the country.  John D. Rockefeller was the first registered guest. However, he didn’t stay very long.  Being highly allergic to paint, after his first whiff of the new paint smell, he checked out and registered at the Antlers.

Superb service, which continues today, was vital to Penrose. He expected every employee to provide a service level similar to that found in the finest European hotels. His new executive chef, Louis Stratta, immigrated from Italy “to create the finest cuisine to be had at any hotel.” All Broadmoor employees received comprehensive training.

Penrose relentlessly expanded the facilities - everything from two golf courses, to tennis courts, an indoor ice skating rink, and a polo field with grandstand. He had a glass enclosed pool built, riding stables and a riding academy constructed, and tours provided to nearby attractions.


He introduced the rodeo to the Broadmoor in 1927 and often allowed Native Americans to set up their tepees on Broadmoor grounds.  That same year, Penrose was made a chief of the Sioux tribe in a special ceremony complete with buffalo-horned headdress, moccasins, and war paint.

Perhaps, because of all this endless expansion, the Broadmoor was a money loser. It had $50,000 to $150,000 in operating losses annually.  During the Depression, many services were cut and unused with its wings closed.  In 1932, the hotel went into receivership, and Penrose bought out his partners. It was only after Penrose’s death that the hotel started making money.

In 1938, Penrose completed the Penrose Stadium which housed the annual “Pikes Peak or Bust” Rodeo. It was razed in1970 and is now the location of Broadmoor West. The Broadmoor was now home to seven separate dining and drinking spots, garage facilities, a museum, bowling lanes, movie theater, skeet range, and several high class shops.

After Penrose’s death in 1939, ownership transferred to  El Pomar Foundation. The Foundation built a meeting, conference, and entertainment facility. It also constructed a nine-story 144 room Broadmoor South Tower topped by the elegant Penrose Restaurant. Even today, the Penrose, is Colorado’s only Forbes Five Star and AAA’s Five Diamond restaurant.

In 1988, the Federal Tax Reform Act of 1969 forced the foundation to sell its controlling effort in the Broadmoor to Oklahoma Publishing Company owned by the Gaylord family. They also sold the Manitou Incline and the Manitou and Pikes Peak Cog Railway.

Oklahoma Publishing Company has newspaper and broadcasting interests. But, perhaps, it is best  known for its Gaylord Entertainment division with such attractions as the former Opryland in Nashville.

Under their leadership, they have completed a $75 million dollar renovation plan including a major makeover to the main building. The spa, a five star facility, has expanded to 43,000 square feet. They have renovated all three golf courses, added shops and cottages, opened Broadmoor West Towers and built a second conference center. The hotel currently has 779 accommodations, 16 restaurants and cafes, and four bars.

In 2011, Philip Amschutz purchased the Broadmoor and the cog railway as well as other non Colorado Springs assets from Oklahoma Publishing Company. He is considered Colorado’s richest resident. He parlayed oil gains into buying the Southern Pacific Railroad and then laid fiber-optic cable along the right of way, forming Qwest Communications in 1996. He is recently into sports, entertainment, and media venues. Amschutz has plans for renovations and additions as well.

Golf has always been a recreation mainstay at the Broadmoor.  In 1916, Donald Ross, a golf course architect, designed the first golf course, the 18-hole East Golf Course. Ross, who had designed several courses, declared it as his greatest work. A casino, which had been on the grounds before the Broadmoor was built, became a golf club. When completed in 1918, at 6400 feet, it was the highest elevation course in the country. In 1948, the Broadmoor hired Robert Trent Jones Sr. to redesign nine holes. It opened in 1952 as the new East Course.

It is one of only 12 North American and Caribbean golf courses to receive a five-star rating by Golf Digest. The same magazine gave it a number one in customer service among resorts. Links magazine voted the Broadmoor a Top 25 Golf Resort of the World in its Silver Anniversary edition.

Ross designed the nine-hole West Course in 1918.  In 1965, Robert Trent Jones Sr. added nine holes to the original course. At 6800 feet, it surpassed the East Course in elevation and has more doglegs and steeply-angled greens than the East Course. It was host site of the 1998 PGA Cup Matches.

Ed Seay and Arnold Palmer designed, in 1976, the third course, the Mountain Course. It reopened in July 2006, after undergoing renovations by Nicklaus Design. It plays to a maximum of 7700 yards and is a par 72

Other golf tournaments have also taken place at the Broadmoor. Between 1921 to 1994, the Men’s Invitational Golf Tournament took place annually. The facility hosted seven Trans-Mississippi Golf Tournaments between 1927 and 1964 and in 1935 and 1941 was the venue of the Western Amateur tournament. It was home for the World Seniors Golf Tournament between 1960 and 2001 and the Olympic Golf Classic during the 1980s and 1990s.

Women’s golf has not been ignored.  In 1942, Babe Zaharias won the first Broadmoor Women’s Invitational. She won the event two more times during the1940's. Today it’s touted as one of the country’s top women’s amateur competitions. In 2011, the Broadmoor hosted the U.S. Women’s Open.

If you want to play, you must be a guest at the hotel or a guest of a member. Rates vary depending on the time of year and the course played. All are open May 1 through October 31. During the rest of the year, check for closures.

The Broadmoor tennis facility is ranked number three by Tennis Magazine and its staff number five. Use rates for outdoor courts are $30 an hour; indoor courts $34 per hour. They rent shoes, ball machines, racquets, and ball baskets.  Professionals offer lessons. The Broadmoor Tennis Pro Shop is on site.

In 1937, the Riding Academy became an ice arena, the Broadmoor Ice Palace, Colorado’s largest indoor arena. It was also the largest, enclosed ice arena west of the Mississippi and the second, after Lake Placid, to offer summer skating.

In 1961, it was renamed the Broadmoor World Arena. The building was torn down in 1994 and replaced by the West Tower.

The Broadmoor Skating Club has produced three Olympic gold medalists: Peggy Fleming, David Jenkins, and Hayes Alan Jenkins. These three skaters won world championships as did such Broadmoor stars as Jill Trenary and Tim Wood.. The club was instrumental in bring the World Figure Skating Museum and Hall of Fame to Colorado Springs. It’s located at 20 First Street, just a few blocks from the Broadmoor.

The Sunday brunch in the Lake Terrace Room takes place in an atmosphere of ice sculptures, live piano music, and tables decorated with fine china, silverware, and tablecloths. This past June, Earl and I thoroughly enjoyed it and easily understood why Fox News rates it in the top ten of Sunday brunches.

This extravaganza, from 9:00 a.m. to 1:30 p.m., is worth the $52 adult price.  Seating takes place on the half hour and reservations are mandatory.  You have a choice of over 100 items so its best to come very hungry.

The tough part is making decisions of what to choose.  They have anything you could imagine for breakfast: eggs benedict, custom made omelets, Belgian waffles, bagels and lox, and corned beef hash, For pastries, you can choose muffins of all types, croissants, cinnamon rolls, and banana bread. They have up to six types of cheese including Bleu and Gourmandise. As for fruits, you can have watermelon to pineapple or if you prefer raspberry smoothies or a blueberry and cream parfait (one of my favorites that morning).

They have salads and cold meats of various types. There was Nova Scotia salmon and poached salmon, a marinated seafood salad, antipasto, and roasted Portobello salad among the choices. Raw bar lovers will appreciate the crab claws and oysters on the half shell.

In the middle of the room, we found hot breakfast foods: potatoes, bacon, sausage, and biscuits with sausage gravy.  If you prefer, scoop up cereals, pancakes, homemade granola, and dried fruits. Not enough? How about cheese blintzes with berry sauce?

On the other side of the hot breakfast table, you’ll find all types of meats escorted with interesting side dishes. Main dish choices vary from week to week. But ours consisted of barbecue pork, Colorado Red Trout, Colorado lamb, roasted duck breast, Chicken Marsala, and a grilled vegetable medley. An example is the roasted duck breast was accompanied by ragu stuffed dumplings, roasted baby carrots, endives and dried cherry au jus.  The Chicken Marsala had hand formed pasta, baby green beans, roasted mushrooms, and sun-dried tomatoes.

There were 20 different deserts on top of several tables highlighted by a Chocolate Fountain and the Broadmoor’s famous Bananas Foster. I couldn’t resist the Foster and added to it a Lemon Creme Brulee. Earl headed for the bread pudding. They also have a sundae bar.

If you are gluten sensitive, they have a gluten free section. That day’s offerings were gluten free penne pasta, Colorado lamb, pork ribs, and griddlecake with berry compotes.

We left the Broadmoor feeling full and content. The food was so delicious, the atmosphere so refined, that we still have special memories of that event two months later.

Forbes has given the Broadmoor a rating of Five Stars for 54 years. AAA has given it Five Diamonds for 37 years since the ratings started. It is the only hotel to receive these ratings for such a period of time.
Back 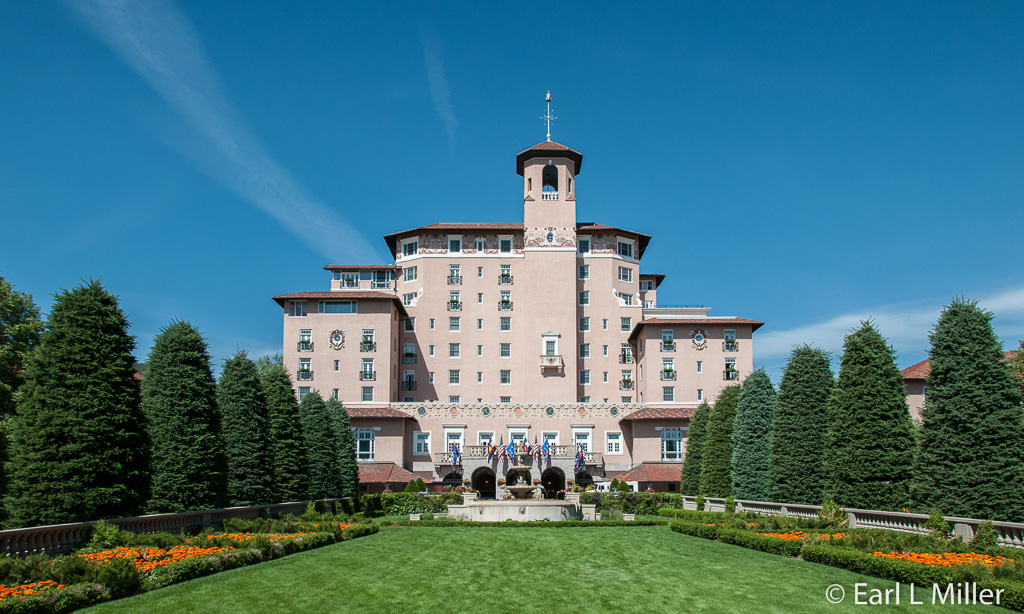 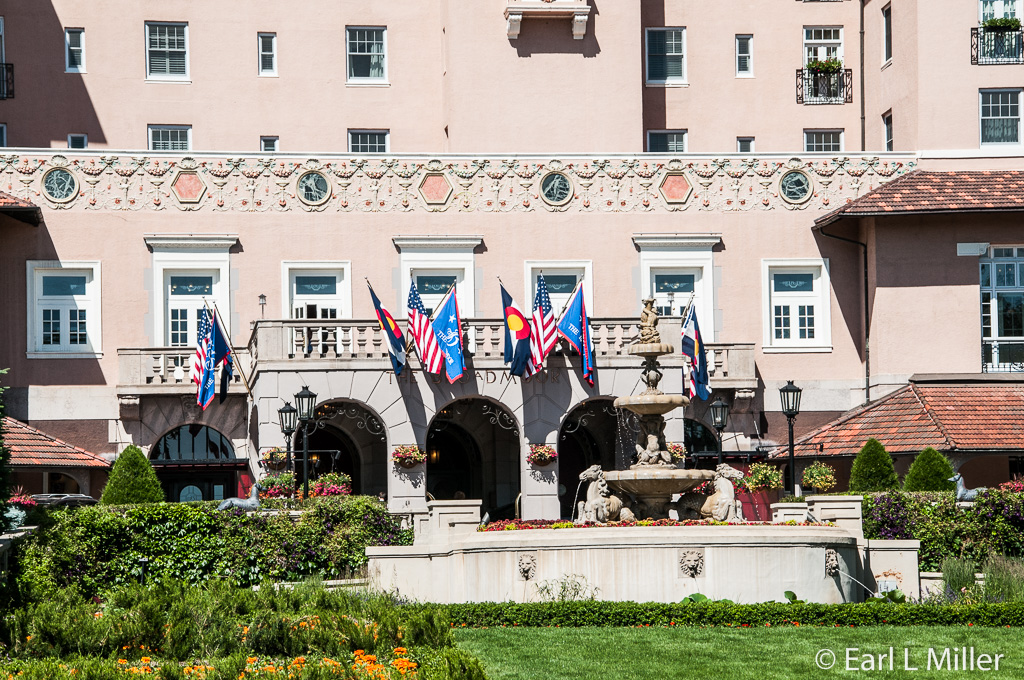 Close Up of the Front of the Broadmoor Hotel 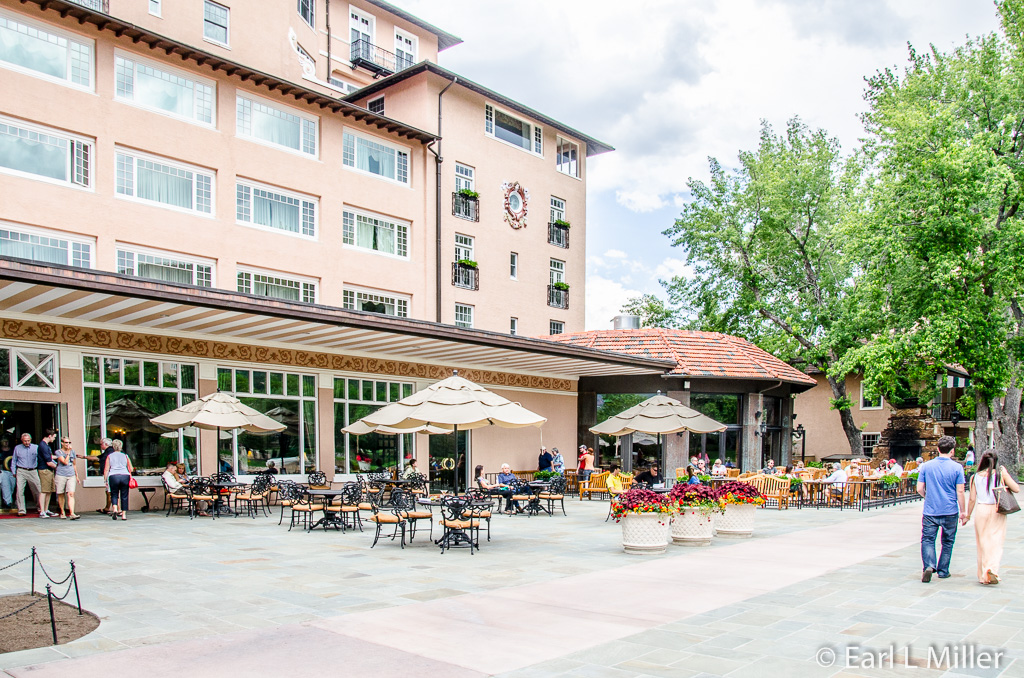 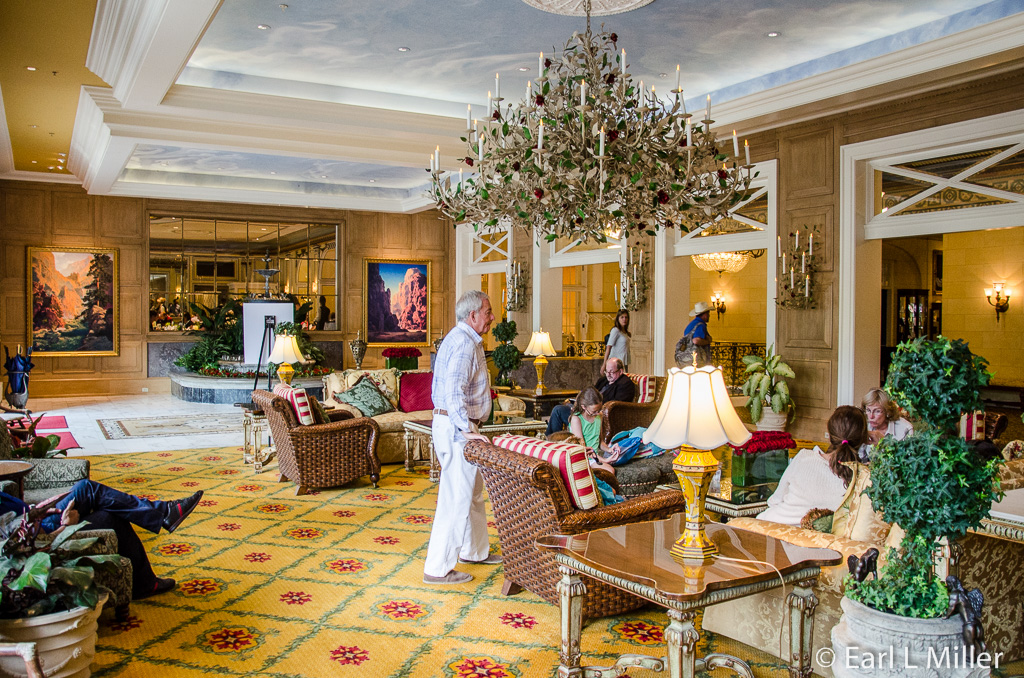 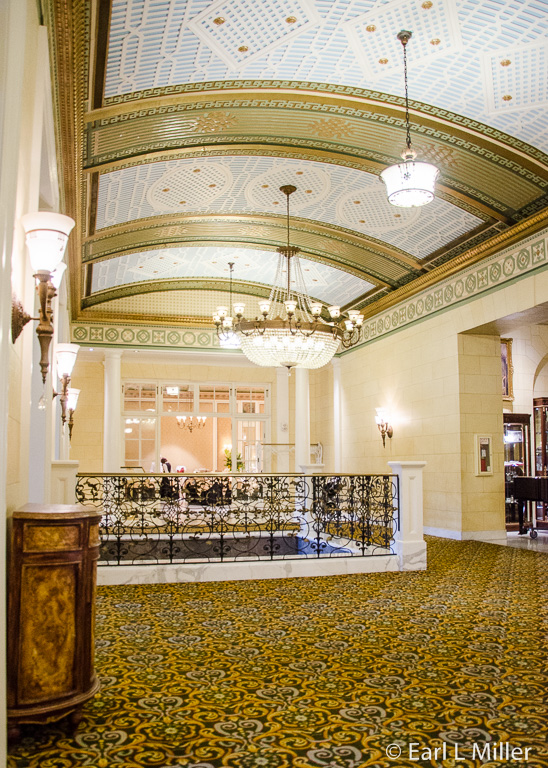 Another Interior of Broadmoor Hotel 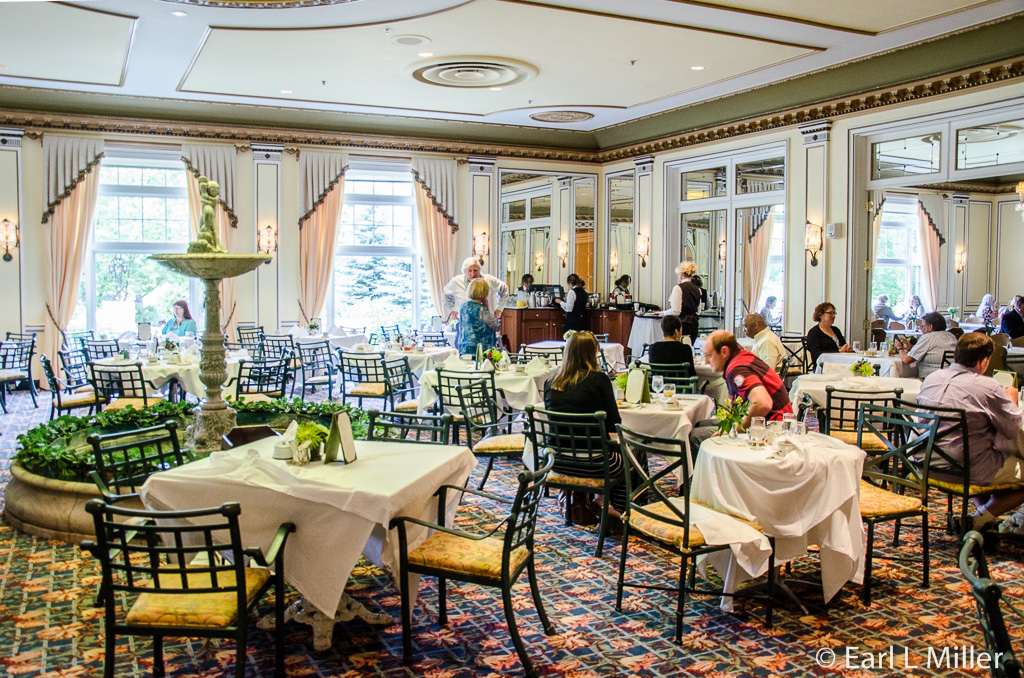 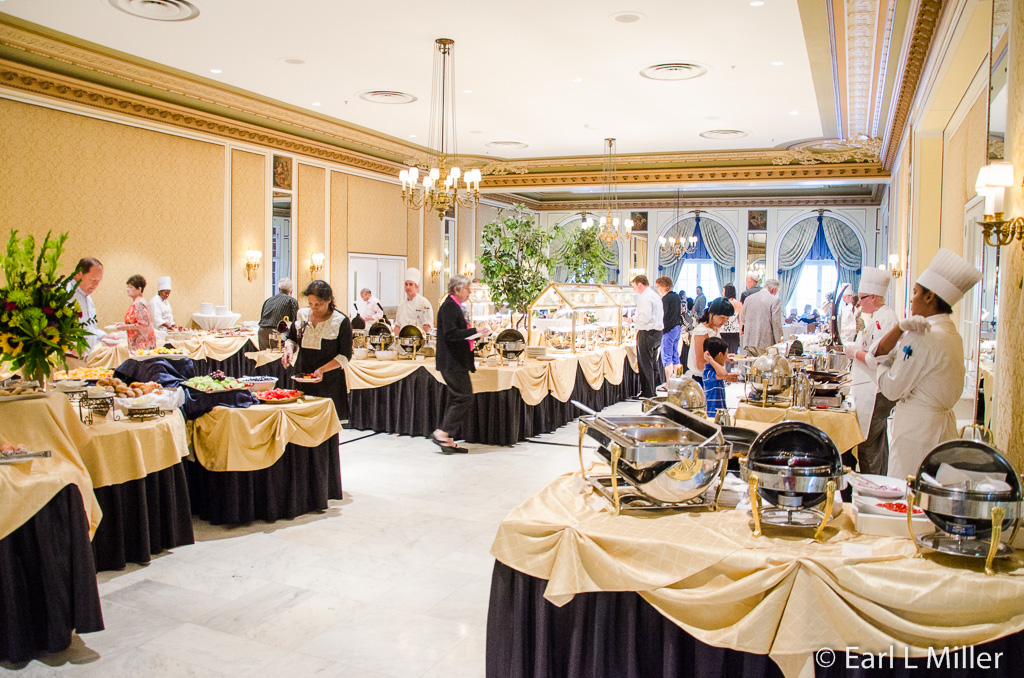 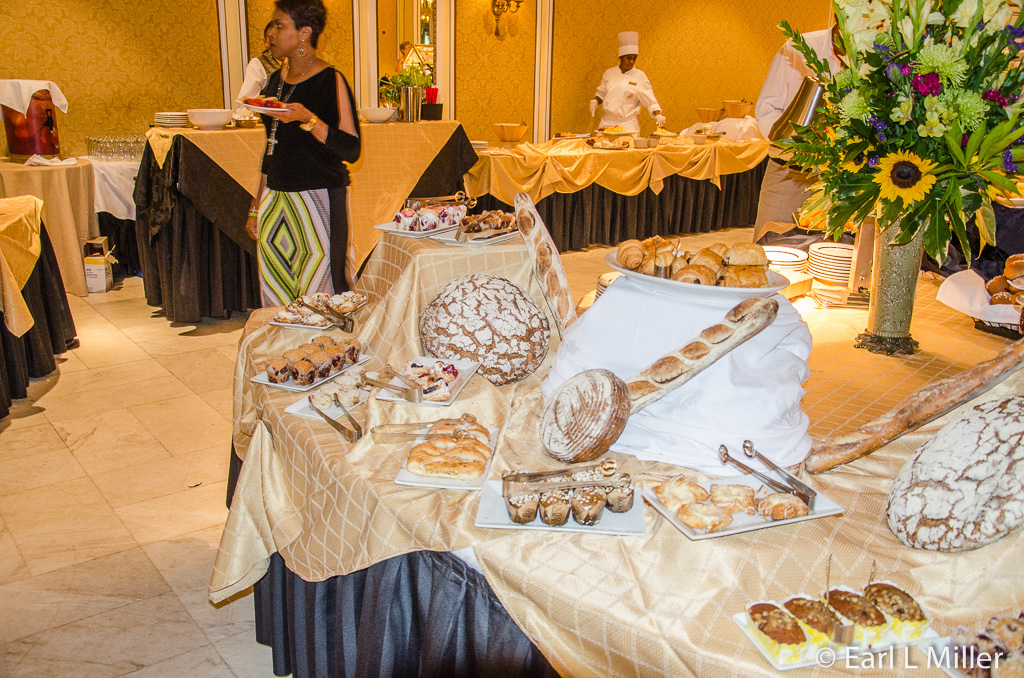 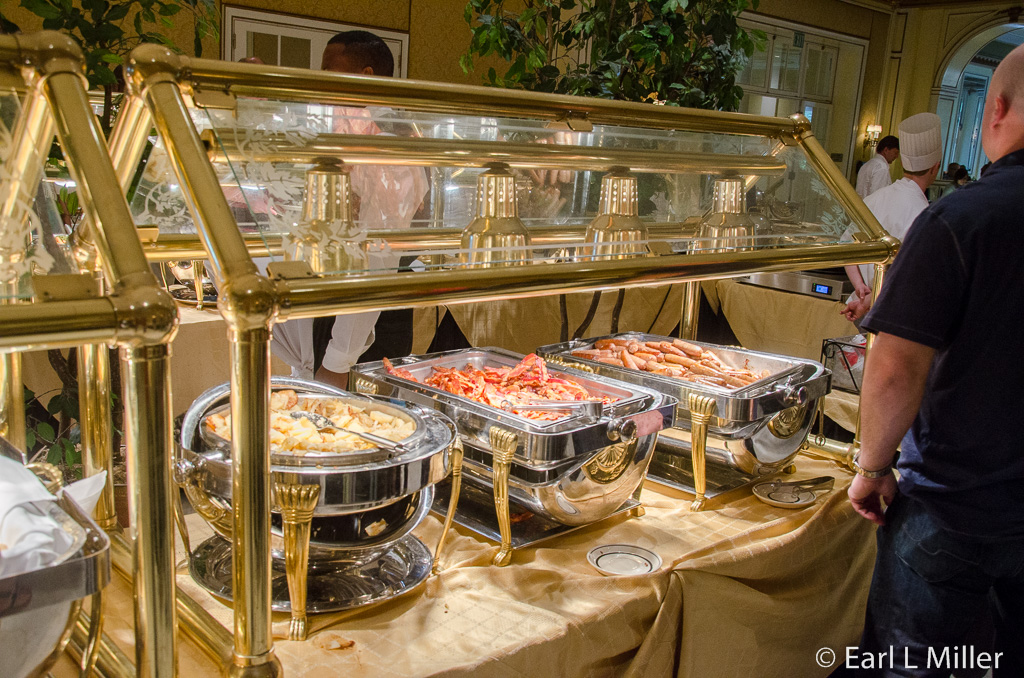 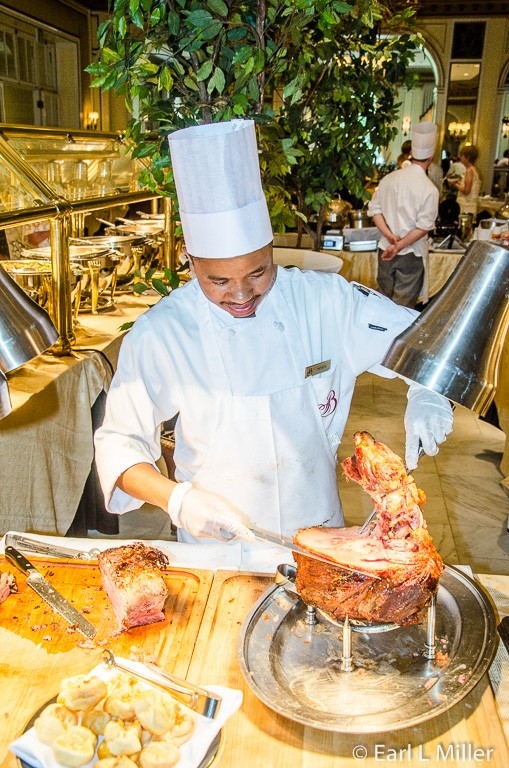 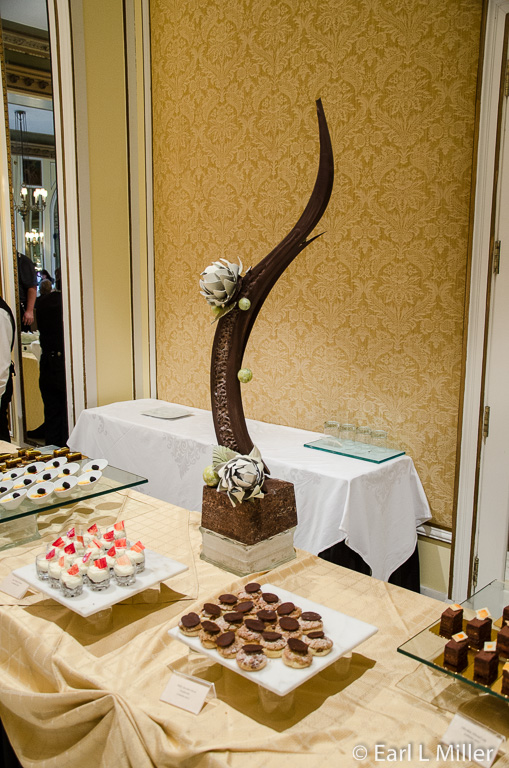