Since we arrived Friday night, we have learned much about Colorado Springs.

1. Take it easy and let yourself get used to the higher altitude for several days. It takes awhile from going from Phoenix’s low altitude to over 6000 feet. We have been spending our time chilling out instead of running around.

Earl has spent his mornings reading and watching TV. I have been attacking a new counted cross stitch. This one is for us and will be a banner across the far end of our dining room. Pierre doesn’t give a hoot about anything. He just meows.

2. Besides making your own guidebook or at least reading good ones like Frommer’s and Fodor’s, it’s wise to check out city visitor centers for additional information.

We did go to the Colorado Springs Visitor Center on Saturday which houses a ton of brochures about the area. It’s also a good place to ask staff questions about the different attractions. On Sunday, we stopped by the visitors center in Manitou Springs (pronounced Manitoo). This center is very small in comparison to the C.S. one and has a lot fewer brochures.

Traveling through the small town of Manitou revives memories of Gatlinburg, Tennessee. It has lots of souvenir shops and restaurants lining one main street, a variety of nearby attractions (In this case, Garden of the Gods, Pikes Peak Cogway, Ghost Town Museum, Heritage Museum), and no place to park.

We did discover on Sunday Adam’s Market Café in Manitou. Think of a decor combining Country and Victorian atmosphere with food featuring everything from Thai wraps to Southwest. We enjoyed their Peak sandwich consisting of turkey, fresh spinach, almonds, and tomato covered by a cream sauce. It was as good as it sounds.

3. The area has excellent restaurants with lots of ethnic groups represented. You’ll also find the chains like Mimis, Village Inn, and Applebees plus the usual fast food restaurants.

On Monday night, we ate at Edelweiss. Bavarian decor with top notch German food is the theme here. Earl had chicken cordon bleu while I had weinerschnitzel. Service was superb and prices were moderate. You can order smaller plates at a lesser price which were more than adequate for us.

Last night, we tried Front Range BBQ. My ribs melted off the bones and Earl reported his pulled pork sandwich was all meat not fat. This restaurant has consistently won best BBQ in local contests for the past 10 years. On Wednesday, Saturday, and Sunday nights they have live bands. Going on a Tuesday was a good idea because parking spaces were tight enough even without the crowds. This restaurant is located in Old Colorado, the historic area of Colorado Springs.

4. In just the Manitou and Colorado Springs area, you’ll find 14 museums. Some of these are one of a kind as their associations are located here: world figure skating, rodeo, and the Money Museum of the Numismatics Association.

We spent two hours on Tuesday at the Money Museum and found it fascinating. They have three exhibit areas. The Harry W. Bass Collection (He was a Dallas oilman) is valued at $40 million. It is a comprehensive collection of American gold coins including Eagles, Half Eagles, and Double Eagles; experimental pattern coins, and paper money. Pattern coins were designed but not the chosen ones to be minted. The collection has 174 pattern coins dating from 1835-1896. Some in his collection are so rare that there are only one to three of them still in existence.

On the same floor is an extensive exhibit entitled “A House Divided - Money and the Civil War.”  We learned the South had the superior generals while the North with its extensive banking system and opportunity to tax was in much better financial shape to issue bank notes backed by gold. The North printed Greenbacks which got their name because the back of the currency was green. Southern money printed by banks and individuals became obsolete and was useless by the end of the war.

The North developed the first Income Tax on July 1, 1862. Incomes of $600 to $10,000 were taxed 3%. Those making more were taxed 5%. In 1864, the rates changed to 5% and 10% respectively. The average factory worker had an annual income of $240; the average farmer $150 in those days. Other taxes were levied on a wide variety of goods. This provided the North the opportunity to raise the funds they needed.

In 1864, the term “In God We Trust” was first placed on a coin - a two cent piece. Other firsts from this period were the first Medal of Honor, a cigarettes and tobacco tax, and the start of organized nursing care.

The first silver dollar was minted in 1804. It was dated 1803. Regular production stopped until 1840. From 1834-1845, the U.S. government gave complete sets of U.S. coins including the 1804 silver dollars to certain rulers in Asia who granted trade concessions to the U..S.

In 1868, the General Order #11 of the GAR (Grand Army of the Republic) called May 30 to be a day of memorial for Union veterans. It was first called Decoration Day. It’s now called Memorial Day.

This exhibits also traces events during the Civil War, relates information on the Generals, displays a surgeon’s tent, and exhibits money where mistakes occurred in minting.

Downstairs a smaller display covers both the international and U.S. history of currency. The Chinese first printed paper currency during the 7th century while the Swedes were the first Europeans to do so - during the 17th century. The U.S. was off the gold standard officially in 1971.

Did those of you living in Massachusetts know the following?  The colony minted coins between 1632 and 1662 until the Royalty stopped them. In 1790, Massachusetts was the first state to produce paper currency.

In the downstairs exhibit, you can view money from all over the word including Asia, Africa, and ancient Rome. Observe early and modern United States money. See other items such as trade goods used as currency.

You can see from the above why we spent two hours here. If you’re interested in money(Who isn’t?) or history, I strongly suggest a visit to the Money Museum. If you’re a senior, it’s only $4  a person and it’s free the third Saturday of the month.

Today we are off to the Garden of the Gods. Have a wonderful Wednesday. 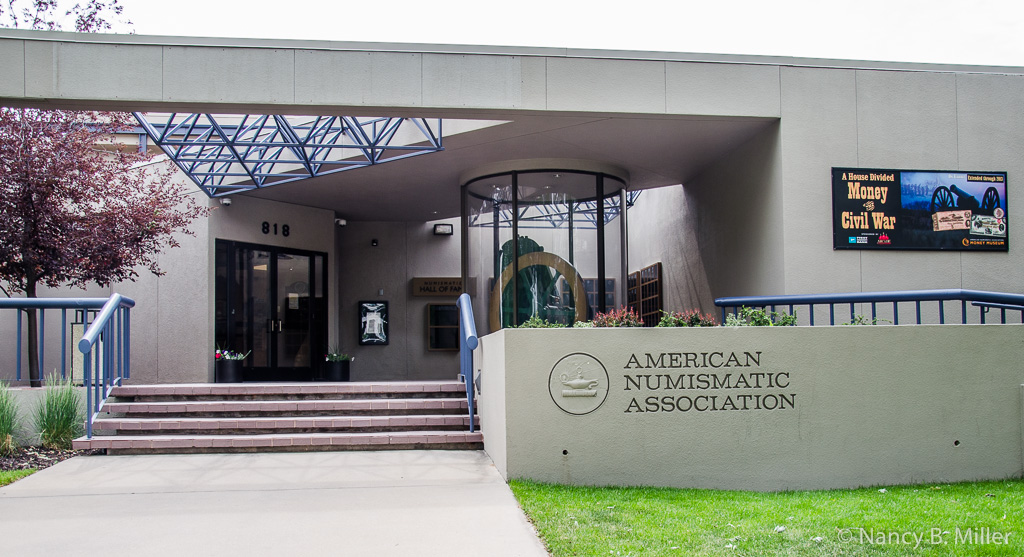