The Columbia Gorge is known for its scenic beauty and history. Lewis and Clark explored it in 1805 while Native Americans view the area as an important fishing and sacred site. Geologically, it’s the only place in the United States where a major river cuts through a mountain range close to sea level.

We found the ideal way to tour it is by taking a five hour cruise on the Columbia Gorge Sternwheeler. With great narration throughout the trip by the captain, excellent food, friendly service, and top notch views, my experience met my expectations.

In 1983, Nichols Boat Works, out of Hood River, Oregon launched this authentic triple-decker paddle wheeler and brought it to the port of Cascade Locks. The purpose was to promote tourism in this small town. Although the port owns the boat, Portland Spirit, headquartered in Portland, operates it. The Sternwheeler docks at Cascade Locks from May to October, running a variety of cruises.

Portland Spirit offers a dinner sunset cruise with cuisine prepared on board. This runs from 6:00 to 8:00 p.m. daily. The fare is $52 for adults and $49 for children ages 4-12. During September and October, these depart less frequently.

On Sundays, from 10:00 a.m. to noon, travelers can take a champagne brunch buffet cruise. It contains breakfast, lunch, and dessert items. The price for that is adults $46 and children ages 4-12 $23.

Every Wednesday the line conducts their supreme cruise “Landmarks of the Gorge.” It’s a five hour trip complete with a continental breakfast and a buffet lunch. This 28-mile trip includes such landmarks as Bonneville Dam, Beacon Rock, Bridge of the Gods, Multnomah Falls, and Horsetail Falls. This is the cruise we decided to book. It costs $88 for adults and $80 for children.

All trips have a $4 landing fee per passenger which is added to the fare when making reservations. The most popular are the one and two hour cruises except for holiday weekends when it’s the dinner cruises.

After boarding the ship, we spent time exploring it. On the first deck, staff had laid out the continental breakfast. There was ample seating if you wanted to eat on this level or you could bring your food upstairs. The second deck, where we were assigned, had the full bar with also coffee and orange juice. With doors on each side, exiting to outdoor standing space on the sides and front, we could go outside for photography. This floor had tables with seating for four and huge windows, ideal for the beautiful views we passed.

The third deck was the home of the pilot house from which Captain Tom Cramblett gave frequent narration throughout the entire voyage. That’s unlike some cruises where you can’t hear the narration or it only takes place on the first half of the trip. Also differing from other cruises is that Captain Tom invited everyone, at the start of our voyage, for a visit to the pilot house.

We helped ourselves to the buffet consisting of croissants, bagels and cream cheese, and a variety of fruits. They offered everything from strawberries and melons to pineapple and grapes.

Cruisers learn that the gorge is a canyon of the Columbia River. Up to 4,000 feet deep, it stretches for more than 80 miles as it forms the boundary between Washington and Oregon. It’s the only water connection between the Columbia River Plateau and the Pacific Ocean.

The gorge at one time consisted of three rapids - upper, middle, and lower. The upper rapids could not be navigated. The construction of the Bonneville and Dalles Dams simplified shipping. Today this area has been named a National Scenic Area.

Lewis and Clark described their trip through the gorge in 1805. While we traveled down the middle, they portaged on the Washington side of the shoreline since they were unable to handle the rapids. Forty years later, pioneers who traveled the Oregon Trail often built a raft and floated down the Columbia River. Captain Tom pointed out that the scenery they saw was much the same as what we were viewing.

It created a lake that stretched for almost 70 miles. After a few months, the Columbia River eventually broke through the dam, washing away much of the debris and forming the Cascade Rapids. The event is remembered in Native Americans legends as the Bridge of the Gods. In 1938, the rapids disappeared under water rising behind the Bonneville Dam.

The modern, steel, cantilevered bridge spans the Columbia River between Cascade Locks and Washington near North Bonneville. It opened in 1926. In September 1927, Charles Lindbergh flew from Portland in his Spirit of St. Louis. He passed low over the top of the bridge then flew underneath the bridge as he headed back to Portland. In 1939, the bridge was raised 44 feet to accommodate the rise in the backwater. The third oldest bridge on the Columbia River is now a toll bridge operated by the Port of Cascade Locks.

Highlights were seeing Bonneville Dam and passing through the lock. The Dam consists of three recreational areas, a visitor’s center and trails, and the fish hatchery. We hope to return to Columbia Gorge this year to spend some time at this extensive facility.

We spotted several fishermen in boats and on platforms. Fish platforms, around for centuries, are allowed only for four tribes: Yakima, Warm Springs, Nez Perce, and the Umatilla. The Native Americans fish year round and sell the sockeye they catch.

The dam has two primary functions which are to generate electric power and provide river navigation. It was built and is operated by the United States Army Corps of Engineers. When the dam was built in the 1930's, it had two generators. Eight have been added, and it now produces one million kilowatts a day. The Bonneville Power Administration distributes the electrical power generated at Bonneville. Bonneville Lock and Dam are named for Army Captain Benjamin Bonneville, credited with charting most of the Oregon Trail.

There are four locks on the Columbia and four on the Snake River to Lewiston, Idaho. The one at John Day, at 110 feet, is the highest in the world.

There is no charge for boats to come through the locks. Pleasure boats can wait up to three hours while commercial boats, like our sternwheeler, have immediate passage. On our return, a sailboat moved into the lock ahead of our vessel which meant the sailboat didn’t have to wait.

Each boat is tied up to a separate floating bin at the lock. It takes 12 minutes to descend in the lock and less time than that to ascend. The locktender controls the speed of the flow of water.

When we left the locks, Captain Tom pointed out the measuring sticks. These show the water depth, how far we dropped (60 feet), and how high above sea level we were (15 or 16 feet).

We learned that the Bonneville Fish Hatchery was built in 1906. Captain Tom pointed out some concrete structures which are  fish bypaths. Part of the money raised by generating electricity goes to help with the fish navigation.

Our captain also pointed out a number of ospreys, several blue herons, and one bald eagle. All the birds fish for salmon. Eagles, on these trips, aren’t spotted as often as the other two birds. If you keep a sharp lookout, you will also see osprey nests. Since the use of DDT has been eliminated, the number of ospreys has multiplied.

One landmark we saw was Beacon Rock housed in Beacon Rock State Park in Washington. The rock is 848 feet tall and made of Andesite. In 1915, Henry Biddle purchased the rock for $1 and constructed on it, for three years, switchback trails, handrails, and bridges. A three-quarter mile path leading to the top, completed in April 1918, has views in all directions. Originally Washington didn’t want to make it a state park, but when Oregon said they would, Washington relented.

We also passed St. Peters Dome, a large basalt spire popular for climbing. In the old days, landslides occurred. That’s why it has no big areas of douglas fir. Its former name was Cathedral Rock.

On the trip, we spotted very few homes. That’s because railroads and highways control the waterfront on both sides.

En route, we passed a number of waterfalls. The first one was Horsetail Falls named for its form. It plunges 176 feet. We stopped on our way back to the motor home for a closer view.

The next one was Multnomah Falls located east of Troutdale. At a height of 620 feet, it is credited with being the second tallest year-round waterfall in the United States after Yosemite Falls. The fall has two major steps consisting of an upper falls of 542 feet and a lower falls of 69 feet. A gradual 9 foot drop in elevation lies between the two.

Oneonata Gorge and Falls are found near Multnomah. Half of all the plant species in Oregon live there. Lichen particularly grows there. Nearby Waheena Gorge is the only place you’ll find the Cactus Fly. This gorge also has a falls.

The last site we spotted, before the ship turned around to head back to the port, was Crown Point. Built in 1916, the Crown Point Vista House is known for its outstanding views of the Columbia River. It was restored and reopened in 2005 to its 1916 appearance and is now on the National Register of Historic Places.

It was at this point on our trip that a buffet lunch was served on the first level. It consisted of fish and chicken dishes, mixed vegetables, yellow rice, fruit and cheese, and a black olive/pasta salad. I spoke to the cruise director, Tom’s wife, Brenda. She advised me that the menu does not usually change on Wednesday cruises. The dinner cruises have beef, chicken, vegetarian, and salmon dishes. Later during our return, the service staff came around twice with baskets full of various desserts.

On our return, we passed numerous fishermen in boats with fishing net wheels. The hoops are 8 inches in diameter. The fish swim into them and become entangled. Captain Tom advised us they were going after chinook salmon and that fish wheels were very efficient. We passed more ospreys and learned these birds fish in the left shallow water and nest on the right. Maybe that’s why we saw several nests.

Two islands came into view. Hamilton Island is manmade. It was created from all the dirt piled there from the construction of Powerhouse 2. Strawberry Island was noted by Lewis and Clark in their journal as the site where they traded salmon, bear grass, and baskets.

Captain Tom then pointed out the Old Columbia Gorge Highway. Its construction began in 1913 and was finished in 1915. It wasn’t until the 1950's that the federal government built segments of I-84. In 1980, the interstate was completed from Portland to Idaho. However, much of the old highway still remains and is available for driving from Troutdale to the Dalles.

We passed the point of land where the Native Americans grabbed Lewis’s dog. It was a Newfoundland he had purchased for $20. The dog was used for water rescues.

At 3:00 p.m., after a very enjoyable trip, we docked at Cascades Locks. We were a little tired but had learned a lot.

To book a cruise on the Columbia Gorge, check out the cruise schedule and availability on the web site. Advanced prepaid reservations are required with all sales final. Payment confirms a reservation booking, and no cruises can be rescheduled. For security reasons, all guests ages 18 and over must present a photo ID on boarding. All guests are photographed before boarding.

Other cruises are available out of Portland. These include brunch, lunch, sightseeing, and dinner cruises. On Thursdays, in July and August, the company offers a Lewis and Clark Cruise lasting seven hours.

Contact Portland Spirit Cruises at (503) 224-3900 or check out their web site at www.portlandspirit.com. 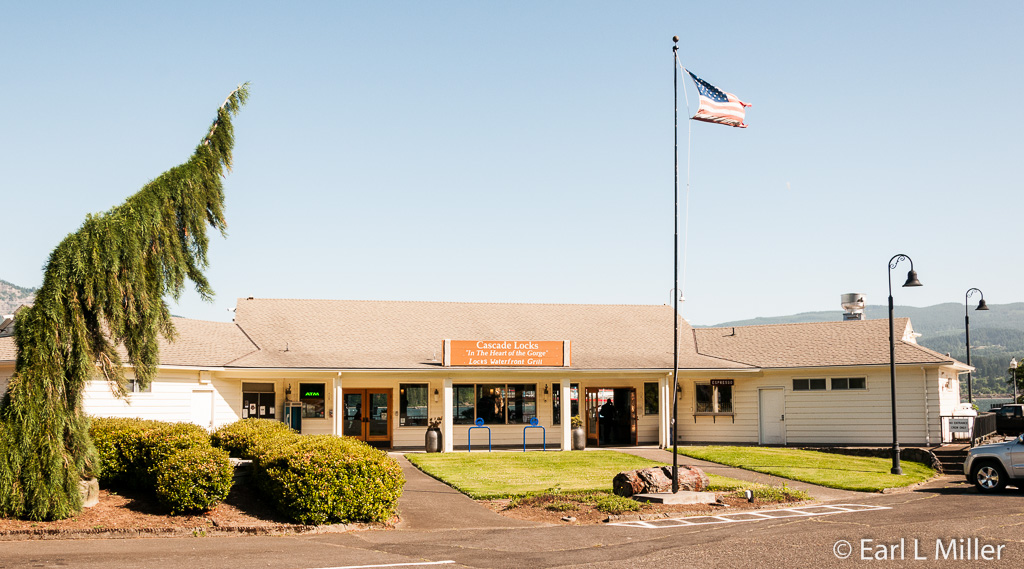 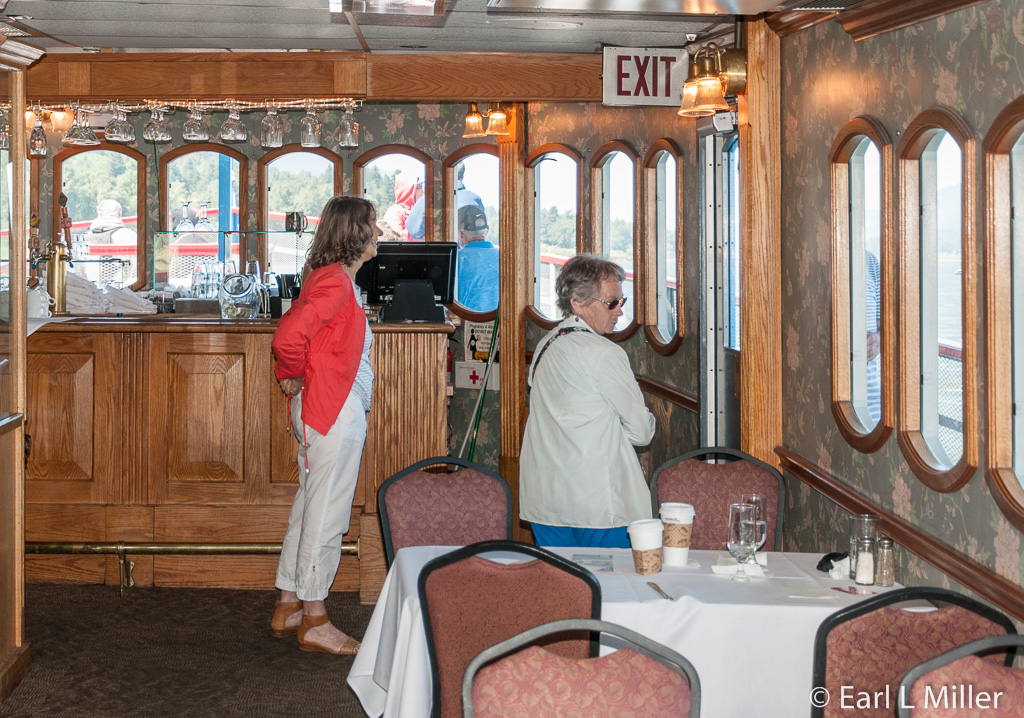 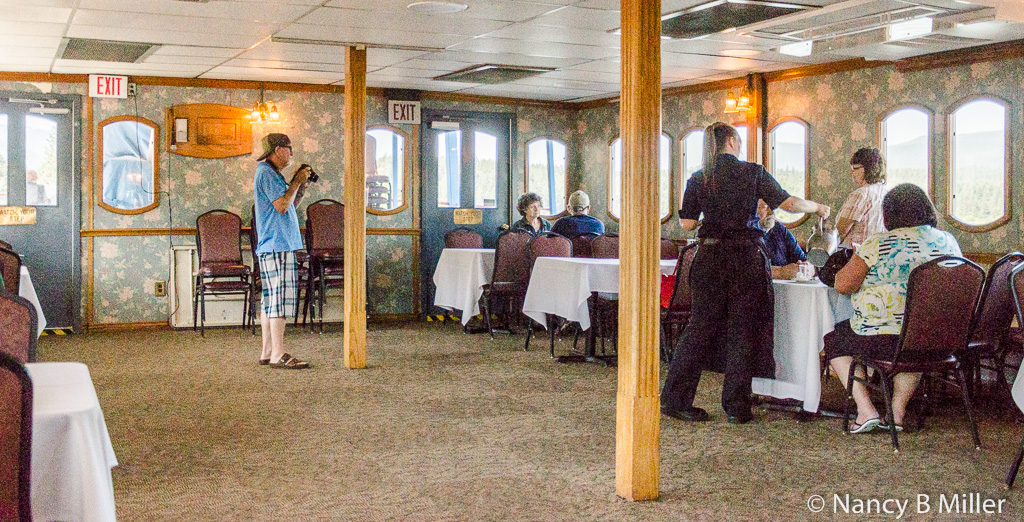 Looking Toward the Rear of the Second Floor 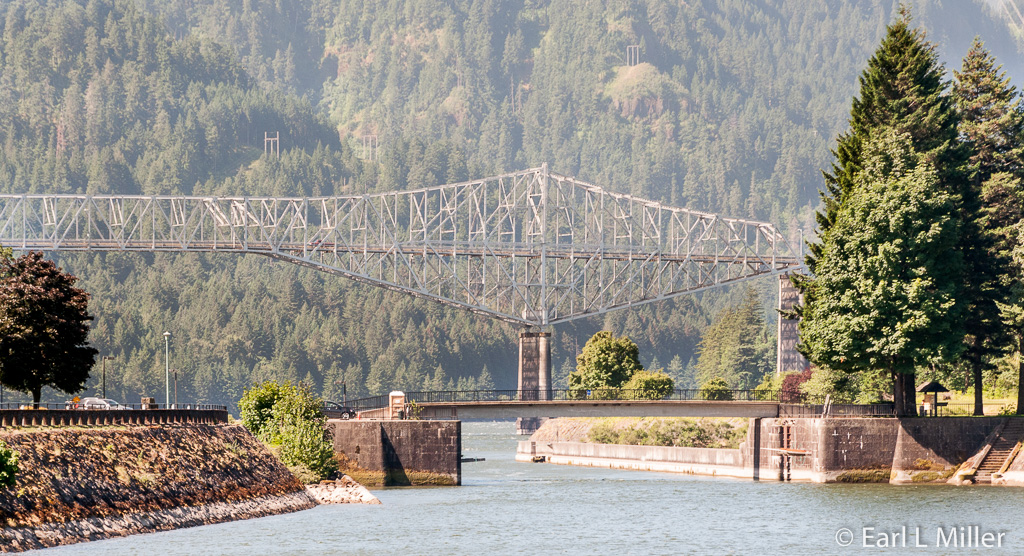 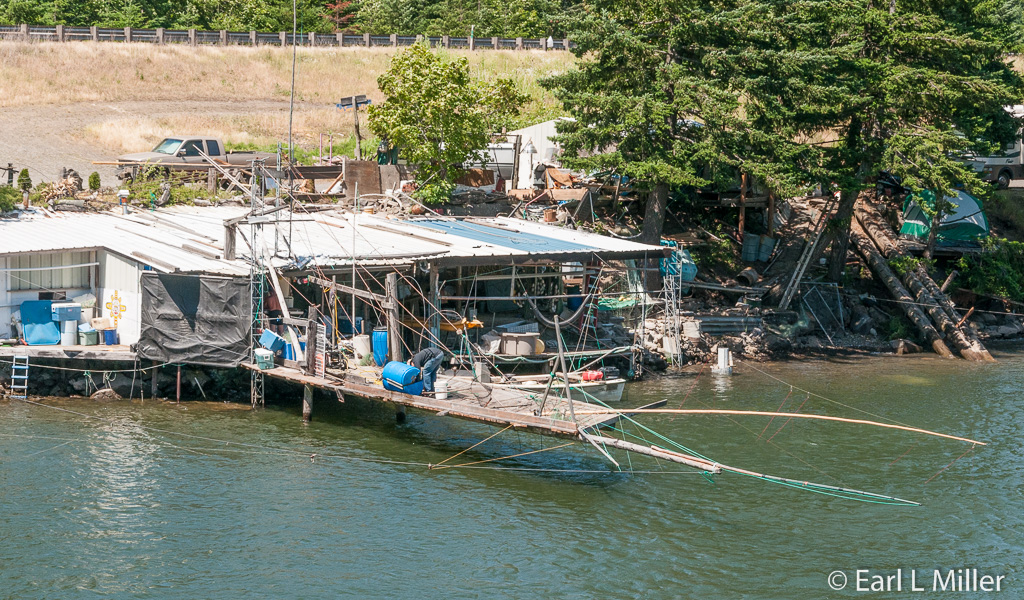 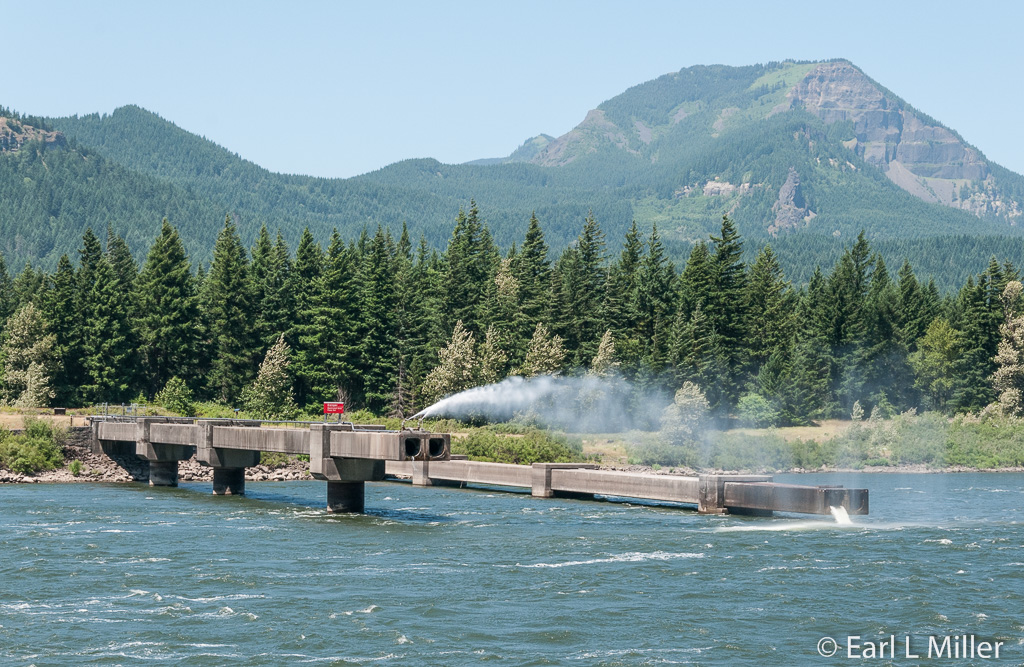 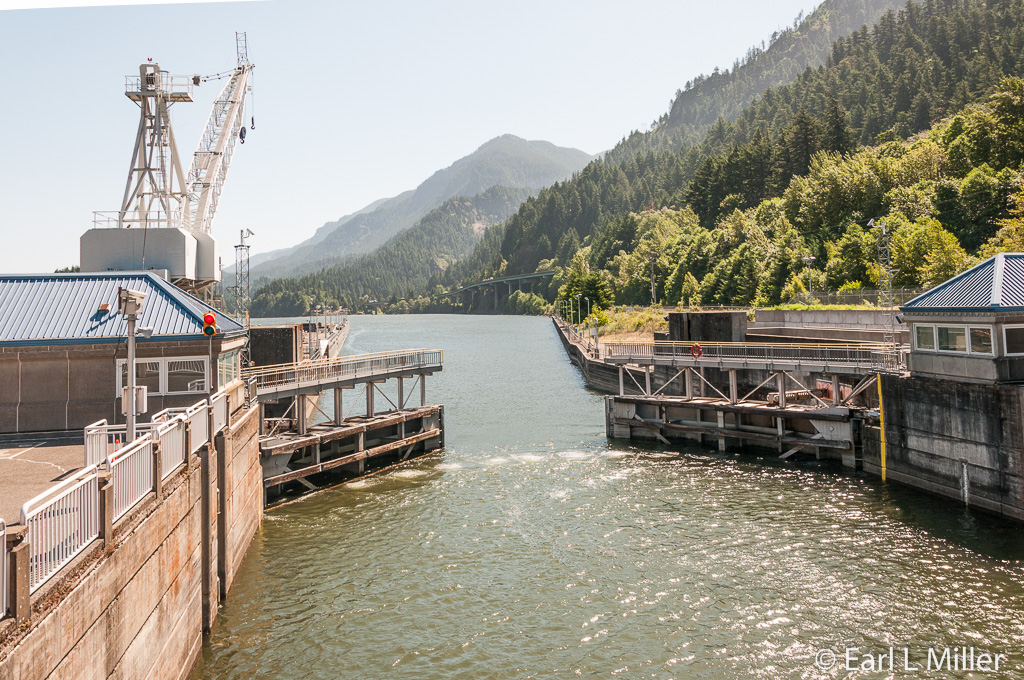 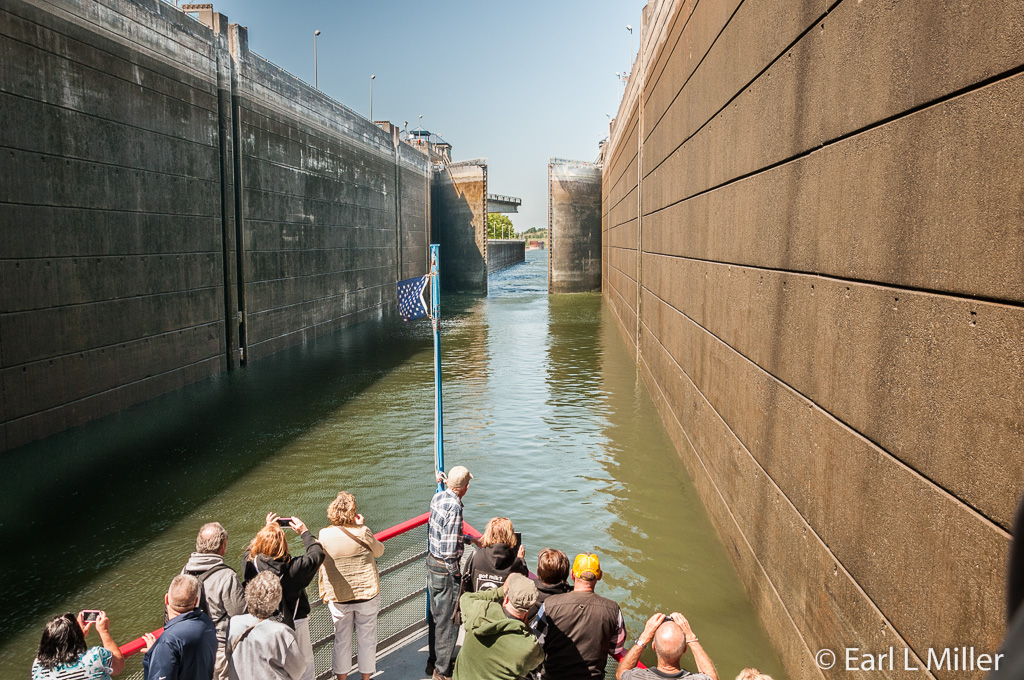 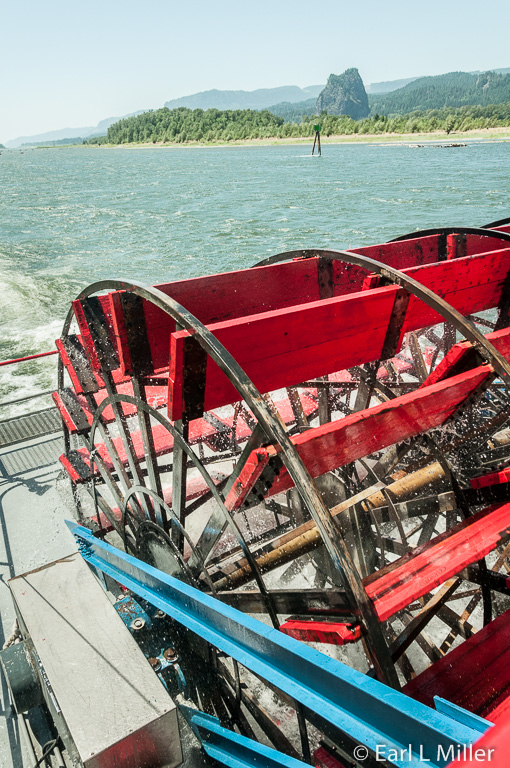 The Sternwheel of the Columbia Gorge

The Third Deck of the Columbia Gorge Sternwheeler 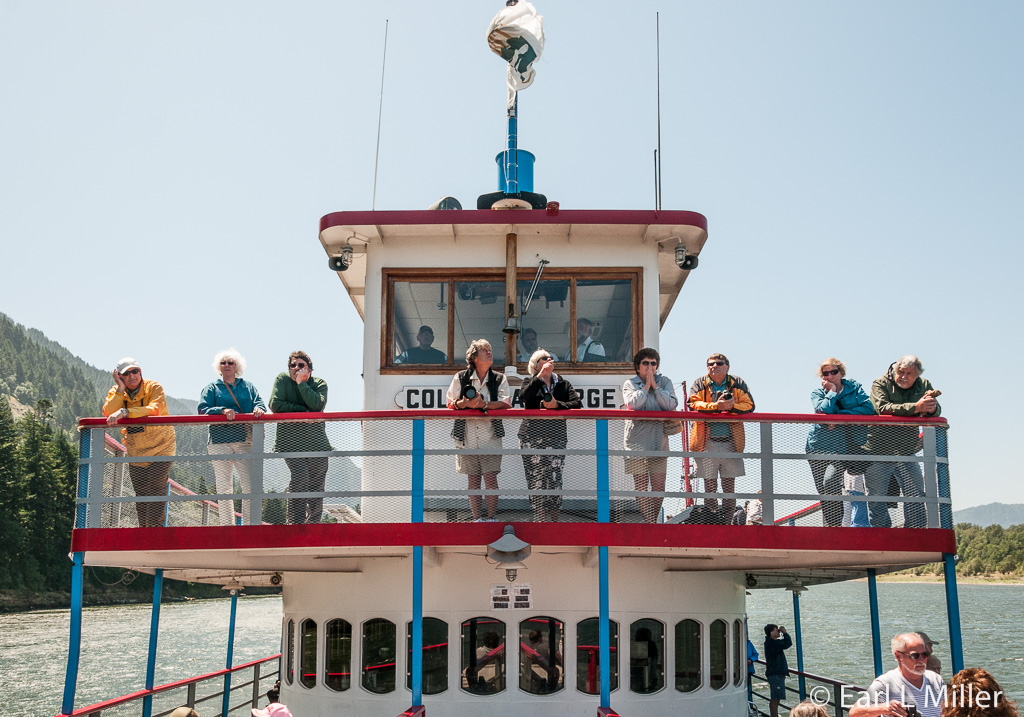 The Pilot House of the Columbia Gorge Sternwheeler 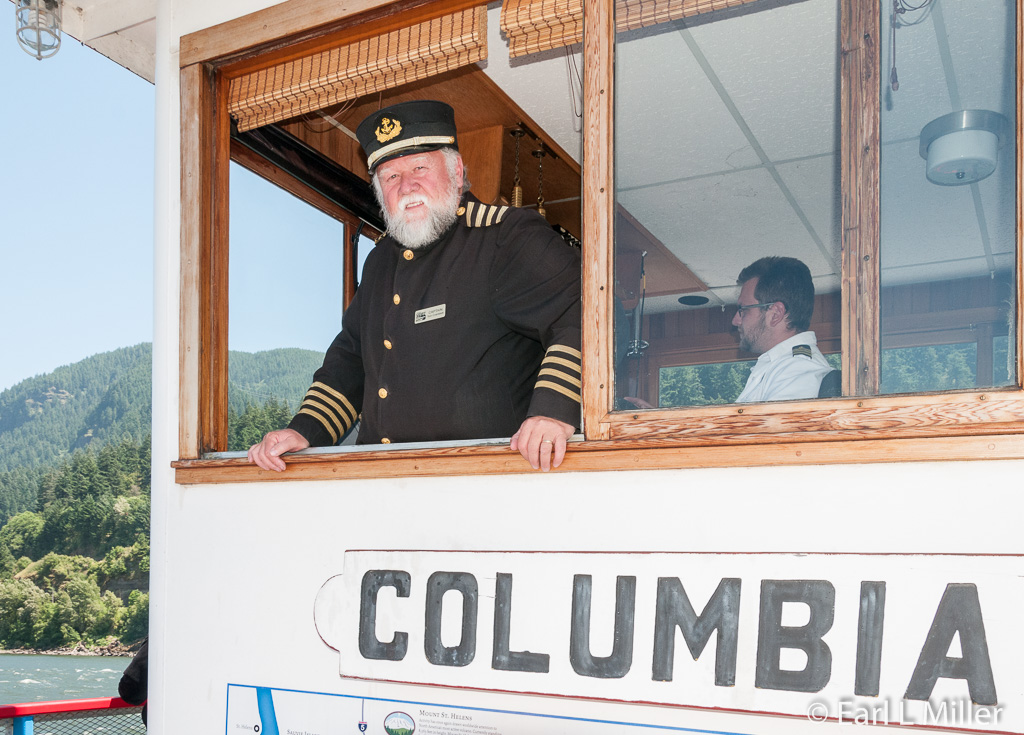 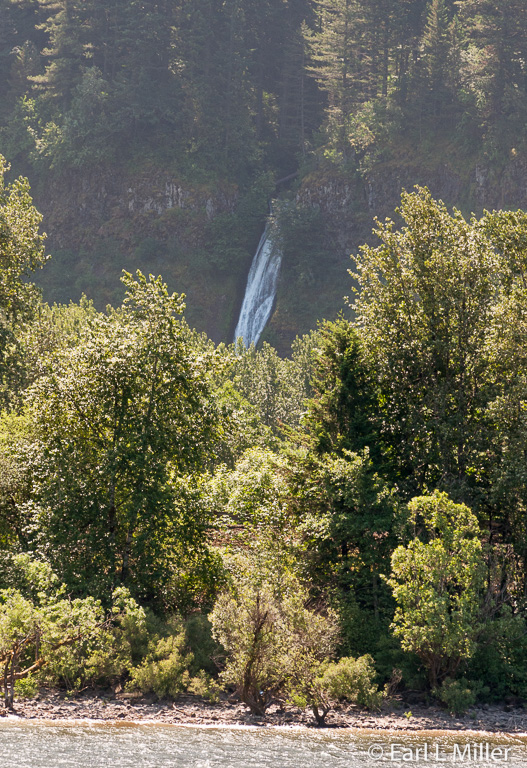 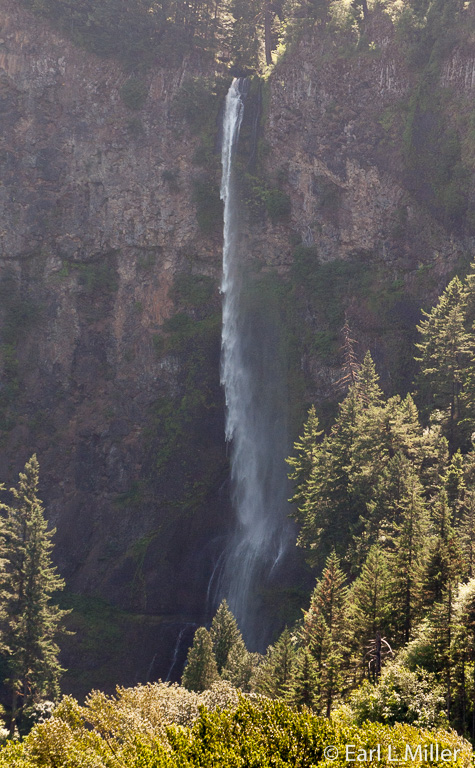 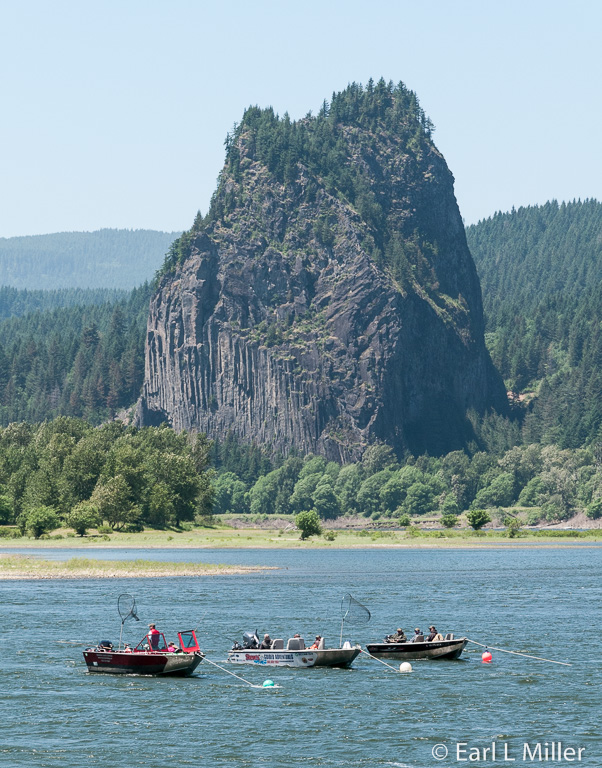 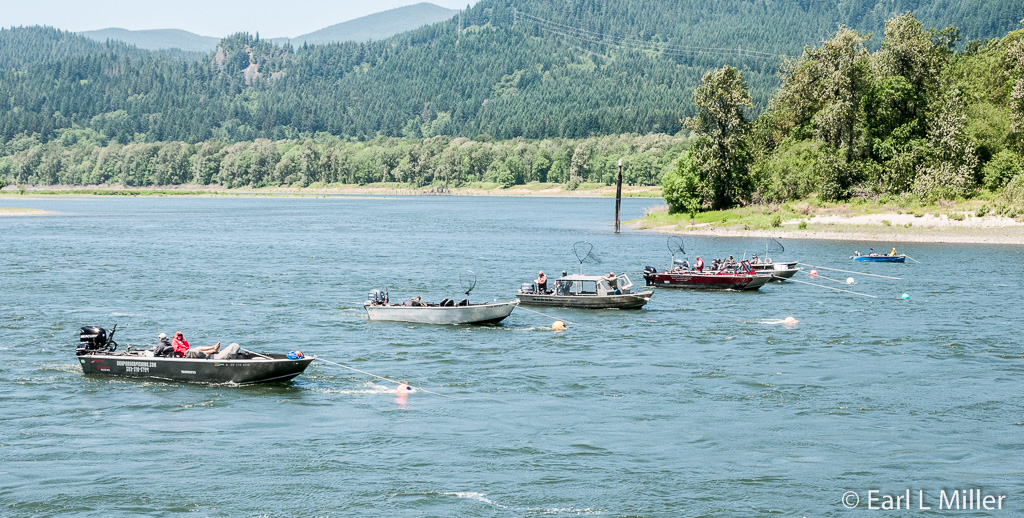 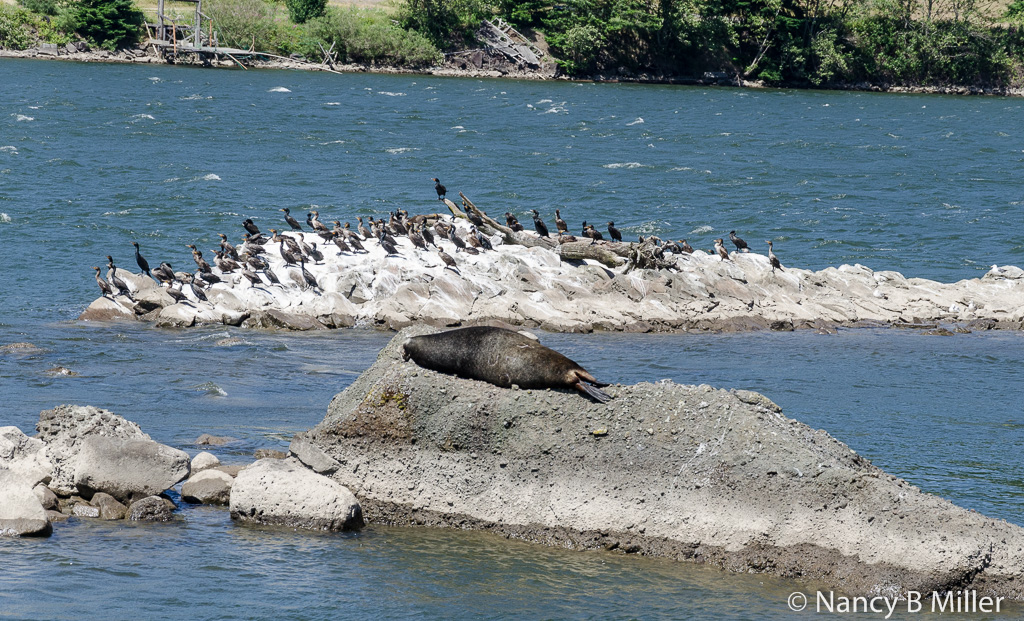 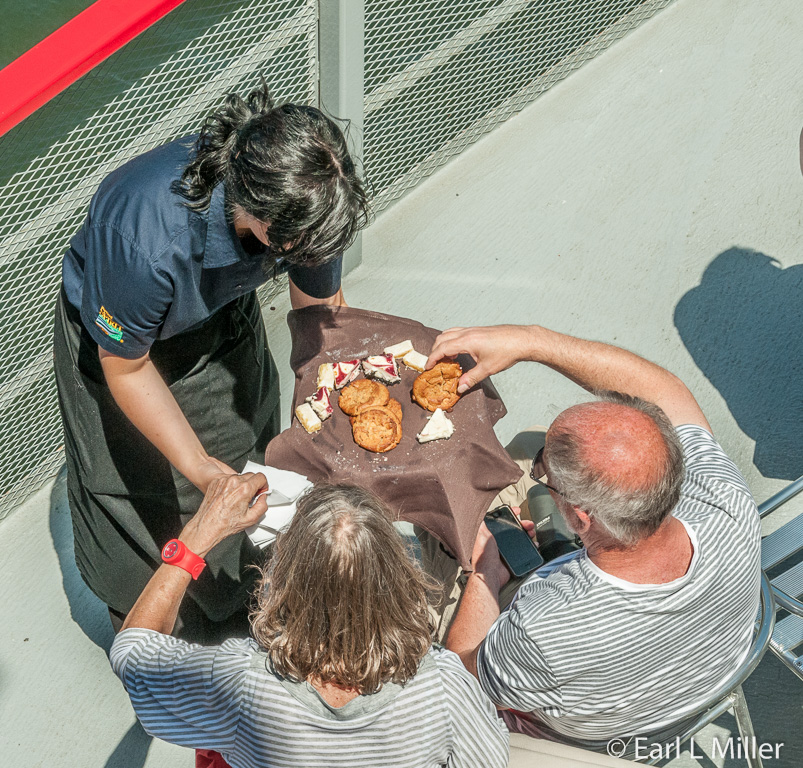 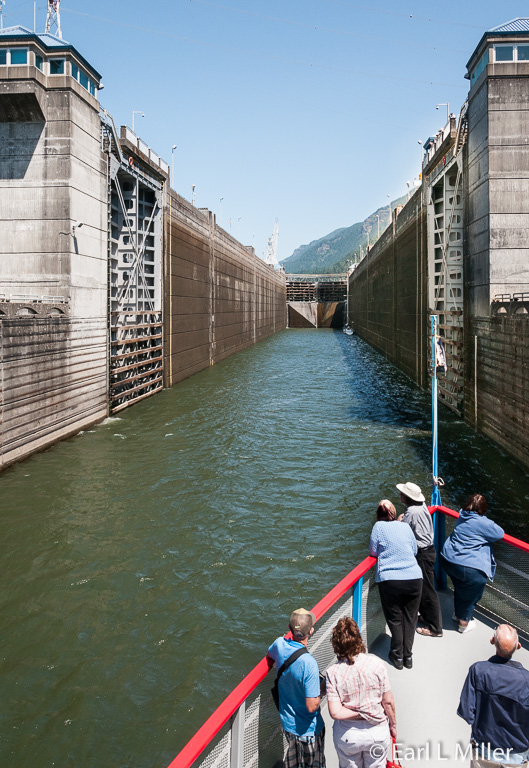 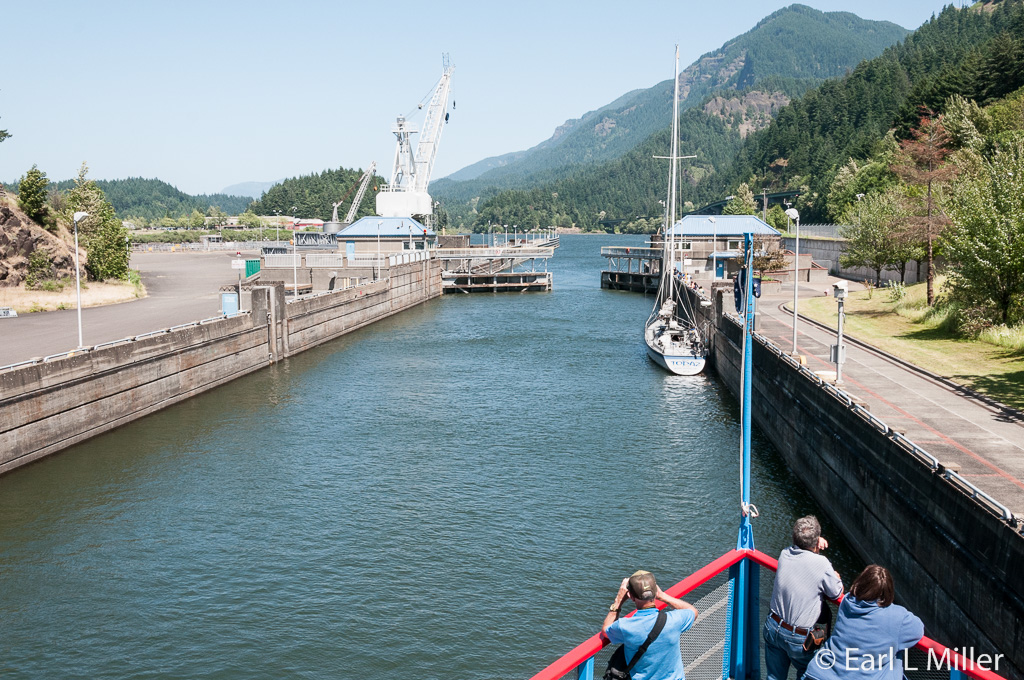 Panorama of Bridge of the Gods 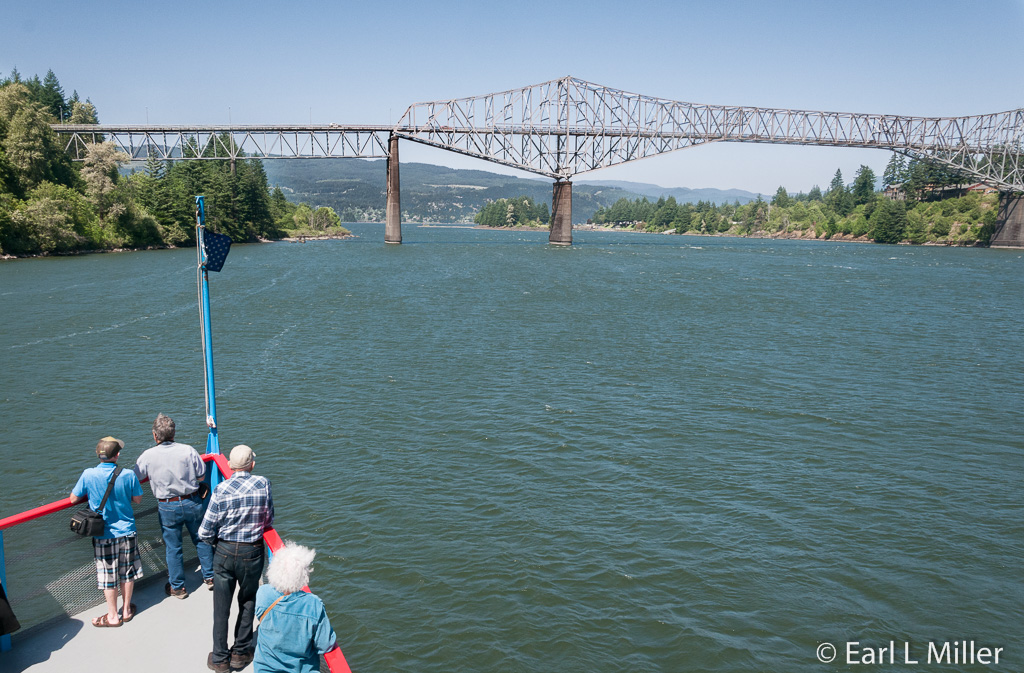 Approaching the Bridge of the Gods