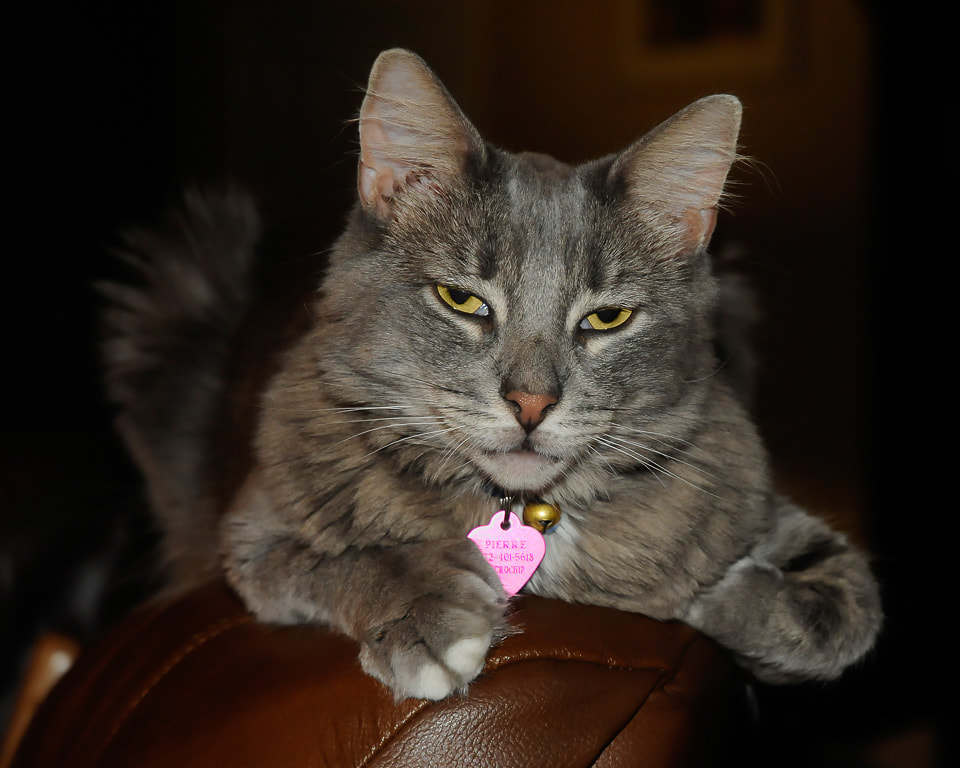 Pierre Logan Miller, now a teenager as of May 18, 2020, has been a member of the Miller household since 2008 when he was adopted from Power Road Vet. Although he physically looks like a Siberian cat, we are not sure, nor are our friends, whether he is part little boy or part dog. That is because he acts like both.

Our little boy gained his name in an unusual manner. He was born at Power Road Vet where he lived the first eight months of his life. His vet, John Stephens, gave him the name MitFit because of his front polydactyl paws. That tag was not going to continue.

We had lost our cat, Ditto, in January 2007 due to the bad Chinese pet food that killed dogs and cats. I was trying desperately not to get another cat since we had started to talk about selling our summer and winter homes. That summer, I volunteered at a pet shelter and fell in love with a kitten. I called him D.J. as he looked like Ditto. D.J.’s real name was Pierre. I lasted a year until a friend urged me to take a look at Pierre.

After going to the vet, we spent the evening deciding whether this cat was coming home. After the answer quickly became “Yes”, I suggested let’s call him Pierre remembering the kitten I had to fight  myself from adopting at the shelter. After all, you're not supposed to adopt pets when you are selling your homes.

Earl agreed, “That will do. He looks like a lemur. Lemurs come from Madagascar which is French. O.K. Pierre.”

The middle name was much easier. We were eating at Logan Steakhouse that night. Pierre Logan came home the next day. The houses sold that summer.

Pierre, like a dog, loves other dogs. We had a puppy named Buddy, a little Shih tzu visit our house last spring. Pierre let the baby romp all over him. No growls. No biting. No complaints. When our cat had enough, Pierre jumped on the living room coffee table which the puppy wasn’t tall enough to conquer. Little Buddy gave him a huge look of disdain and a couple of yips as if to say “That’s not fair, Pierre.”

Pierre does tricks. He can sit, circle, and beg on his hind feet for treats. I can give verbal commands or hand signals. He knows both. He asks for permission to join me on the couch by sitting on the floor until I give the “Up” command. He also knows “Down.”

Houdini has nothing on Pierre. Our cat is able to open any closed doors and walk right into a room or closet. For closed doors with latches, he jump ups, turns the lever, and proceeds to enter. With pocket doors, he has established a method of lying on his side and eventually kicking them open. Fortunately, he has not mastered locked doors yet.

He is eager for me to ask him if he wants a treat. He runs, forget walking, to the pantry and starts pawing at the cabinet door where I keep them.

He also knows do you want water. If he does, his bowl is his third choice. The first choice, which he does at least once daily, is a bathroom sink like a water fountain. He doesn’t care if he gets his head wet since Siberians shed water. His second choice is going spread eagle and drinking out of the toilet which he does not do often. When he was younger, he could actually say the word  “water.”  It was his version but perfectly understandable.

Pierre loves everyone. He is the first to answer the door when the doorbell is rung. He also walks people to the door when they are leaving. In between, he pretends he is a hairdresser. He get behind them, gives them a hug, then proceeds with restyling their hair.

He knows if I am not feeling well and will come running into the room yelling “Ma. Ma.” It is definitely not a meow. He will share the pillow with me. Put his head on it, close his eyes, start purring, and lean over to give me a big kiss.

If I am facing in the other direction when he jumps on the bed, he will come up behind me and gently start tapping me on my back. It’s as if to say “Do you mind. Pay some attention to me. NOW.”

He is also an excellent traveler. He is very quiet in the motorhome until we stop for lunch. Then he reminds us with some very strong meows to put some food in his bowl and give him his water dish. He is eager to see us when we return after being out all day. He waits on the dashboard. As soon as we unlock the coach’s latch, he jumps into the stairwell. His food is on the floor. So that isn’t it. He just wants two laps to cuddle against and goes from Earl to me and back again.

We have had to put food items like doughnuts away in the motorhome. One day when we didn’t, he decided to help himself to the whole box. There was sugar covering the counter and his entire face when we returned.

When we have returned from trips, he heads for his toy basket. One day he wanted to play Hansel and Gretel. He laid his toys out in a train from the bathroom, through the bedroom, to the hall. It was as if he was laying out bread crumbs.

When I am working, he does not like being ignored. He will come and spread out on my desk in my bedroom. Sometimes he falls asleep. Other times, he thinks it’s a great idea to block the monitor screen. If he really wants attention, his hind legs are on the desk. His front legs are on my lap, and he is attempting to give me several kisses.

If I open one eye in the middle of the night, it is guaranteed that within two minutes Pierre will be on my bed, turn around, cuddle as close as he can get, and start to wash my face. He has also proven he can tell time as consistently comes in at 7:15 a.m. to advise that he wants breakfast. If I ignore him, he will take his paw and  deliberately knock one thing at a time off of my nightstand. He starts with my eyeglasses, then my cell phone, and finally the phone and base in which it sits. Fortunately, the lamps are bigger than he is so he leaves those alone.

I did not know that he would live up to his French name given the reputation of French lovers. However, our little son immediately won us over and now charms everyone he meets.

July 9, 2020 - I wake up and look at his toy basket across my bedroom. Pierre has neatly tossed almost all of his toys out of this basket onto the carpet to find the one he wanted to play with. It is a soft red heart about the size of a ball which he has rolled under my bed. I have to laugh at my little son in a cat fur suit. If there was a cat Mensa, he would be a member.